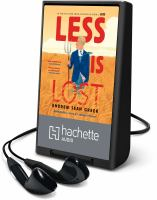 Also in this Series

Other Editions and Formats

General Note
Title from Playaway label.
General Note
Originally published by Hachette Audio ℗2022.
General Note
Sequel to: Less.
General Note
Issued on Playaway, a dedicated audio media player.
General Note
One set of earphones and one AAA battery required for listening.
Participants/Performers
Narrated by Robert Petkoff.
Description
"For Arthur Less, life is going surprisingly well: he is a moderately accomplished novelist in a steady relationship with his partner, Freddy Pelu. But nothing lasts: the death of an old lover and a sudden financial crisis have Less running away from his problems yet again, as he accepts a series of literary gigs that sends him on a zigzagging adventure across the United States. Less roves across the 'Mild Mild West,' through the South and to his mid-Atlantic birthplace, with an ever-changing posse of writerly characters and his trusty duo, a human-like black pug, Dolly, and a rusty camper van nicknamed Rosina. He grows a handlebar mustache, ditches his signature gray suit, and disguises himself in the bolero-and-cowboy-hat costume of a true 'UnitedStatesian'...with varying degrees of success, as he is mistaken by turns for a Dutchman, the wrong writer, or, worst of all, a 'bad gay.' We cannot, however, escape ourselves, even across deserts, bayous, and coastlines. From his estranged father and strained relationship with Freddy, to the reckoning he experiences in confronting his privilege, Arthur Less must eventually face his personal demons"--,Provided by publisher.
Local note
PLAYAWAY

Note! Citations contain only title, author, edition, publisher, and year published. Citations should be used as a guideline and should be double checked for accuracy. Citation formats are based on standards as of August 2021.