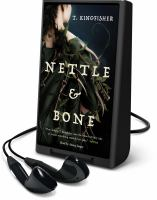 Also in this Series

Other Editions and Formats

General Note
Title from Playaway label.
General Note
"LIGHT."
General Note
Release date supplied by publisher.
General Note
Previously issued by Macmillan Audio ℗2022.
General Note
Issued on Playaway, a dedicated audio media player.
General Note
One set of earphones and one AAA battery required for listening.
Participants/Performers
Read by Amara Jasper.
Description
"Mara never wanted to be a hero. As the shy, convent-raised, third-born daughter, she escaped the traditional fate of princesses, to be married away for the sake of an uncaring throne. But her sister wasn't so fortunate--and after years of silence, Marra is done watching her suffer at the hands of a powerful and abusive prince. Seeking help for her rescue mission, Marra is offered the tools she needs, but only if she can complete three seemingly impossible tasks: build a dog of bones; sew a cloak of nettles; capture moonlight in a jar. But, as is the way in tales of princes and witches, doing the impossible is only the beginning. Hero or not--now joined by a disgraced ex-knight, a reluctant fairy godmother, an enigmatic gravewitch and her fowl familiar--Marra might finally have the courage to save her sister, and topple a throne"--Container.
Local note
PLAYAWAY

Note! Citations contain only title, author, edition, publisher, and year published. Citations should be used as a guideline and should be double checked for accuracy. Citation formats are based on standards as of August 2021.